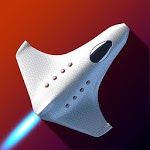 🌠Event Horizon RPG🌠 is a hardcore 2d arcade galaxy game about life in a cosmic world: galactic battles, fights and alien invaders from the void above! The entire Universe for you to discover and explore! Are you ready to look beyond our Milky Way? Create your own military force, build up asteroid ships, motherships and falcons in order to participate in dangerous but exciting cosmic battles. There are billions planets, satellites, stars, constellations and Milky Ways on your galaxy map. Without any doubt (or this action game won't be breathtaking haha), there is a dreadful threat in every orbit that space rangers or ufo from the ocean of emptiness will attack your shuttle...

Forget all the flying games you played before - Event Horizon is the best RPG that have ever come out: a realistic and dynamic one, which is NOT a turn-based RPG.
Game Features:

- You can explore the entire Universe! You will discover millions of new stars! Immerse yourself in a unique interstellar atmosphere!
- Arcade, dynamic galactic battles! - Over 70 spaceships to fly and upgrade - build your own military force and start conquering the entire Universe! You will be able to fly airwings, V-gers, warbirds and many other powerful ships! - Evolve your ship as you advance and level up in the game. - Unlock more than 100 different upgrades and weapons during the game, including hyperdrive warp system, lightsabers, rayguns, shotguns, grenades, laser cannons and swords.
- 10 galactic alliances to join during your infinite adventure! - Have a PvP spacefights with your friends online! Fight against ufo on the Internet like men in black!

The most interesting metagalactic adventures are waiting for you! Feel like a full-fledged space ranger! You are able to explore galaxies, fly dozens of unique ships with the possibility of modification, participate in arcade dynamic battles with the enemies from the void above! You will get a reward for every glorious story!

This game won’t leave anyone indifferent, no matter if you are a beginner or a professional player! You will enjoy great graphics, nice music and sound effects.

To infinity and beyond!
Show more expand_more