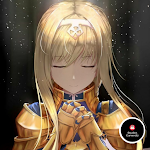 Alice Zuberg is the daughter of Rulid Village's chief Gasupht Zuberg, as well as the childhood friend of Eugeo and Kirito. Due to accidentally breaking a clause of the Taboo Index in her childhood, Alice was apprehended by Deusolbert Synthesis Seven and taken to the Central Cathedral, where she was forced to become an Integrity Knight, named Alice Synthesis Thirty (アリス・シンセシス・サーティ, Arisu Shinseshisu Sāti), with her memories sealed.
Having lost her will to fight following Supreme Priest Quinella's and Chief Elder Chudelkin's death and Kirito entering a comatose state in the aftermath of the battle, Alice returned to Rulid Village with Kirito to avoid possible retribution on the boy's life, reuniting with her sister Selka Zuberg there. Following a goblin attack on the village, during which Alice regained her desire to protect their world, Alice traveled to the Great Eastern Gate to join the Human Guardian Army in order to defend the Human Empire against an invasion by the Dark Territory Army.
Alice has sparkling blue eyes, and long, golden hair[5] that is tied to both sides of her head, and a braid running down from the back of her head, a bow attached at the end of the braid.
Show more expand_more