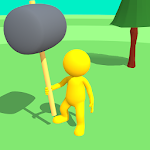 Smash the players on the battlefield and absorb their power! Become bigger and stronger! Win the round, becoming the last fighter who lived in this battle royal!

Smashers.io is a new fun io game where you enter the battle arena, armed with a HUGE hammer. Smash all your enemies! Win and take part in the next more difficult and more powerful battles!
The rules have never been so simple: just smash other fighters and don't get hit! The last io survivor becomes the winner! Handle it?

.io games are simple online fighting games where you battle other players on- and offline to survive as long as possible. It’s super fun!

Battle Royale is a fun game mode where players fight to survive in a limited space and be the last man standing. Our battle royale games are especially fast and fun to play! Be the best smash hero!

Run, smash & avoid other smash heroes and be the last alive! Only one fighter will stay in this arena. So be this fighter!
Show more expand_more