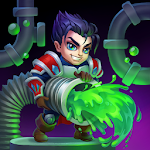 Power up your heroes, unlock skills, train your army and forge a guild. Fight epic multiplayer wars in the ultimate online RPG fantasy adventure. Become a power player and leave behind a legacy as the peaceful guardian of Dominion!

Heroes, titans and other characters battle it out in this epic fantasy online RPG for control over Dominion. A campaign is enacted, and a legacy born.

Battle enemies and fight a war in this epic battle adventure and fantasy game across the lands of Dominion. Collect heroes, earn new power and skills and level up to make them invincible: win the war and establish an everlasting legacy!

Defeat the Goblin in the epic puzzle games!

Power is yours for the taking. Be the ultimate Hero Wars player and build a lasting legacy in the ultimate online RPG heroes fantasy game!

Good luck with battles, Brave Hero, and remember! – We are always here for you via [email protected],
Your Hero Wars Team.
Show more expand_more

Joom. Shopping for every day.

The Walking Dead No Man's Land