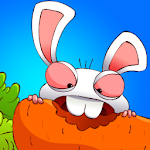 Whose that cute little rabbit over there, looking to make some new friends?
It's Talking Ruru, the cute little bunny that is a fun and interactive character for your device!

Tap around to interact with Ruru and watch his adorable responses - and you can even have our cute little rabbit friend repeat everything you say to him Ruru-style! What's more, is if you like Talking Ruru as much as we think you will, he's easy to share with your friends over Facebook, Twitter, and email. Just make sure to change his background every once in a while- it makes him feel like he's a well-travelled bunny.

Try him out for yourself:
1. Touch either if his ears, and he'll flop it down into his arms away from you.
2. Tap the top of his head so he can give himself a little scratch.
3. Poke his left eye, and watch as it turns red and hops around, slightly annoyed.
4. Poke his right eye, and he'll give his eyelid a little tug.
5. Touch his left hand, and he'll show you his bunny buff muscles.
6. Touch his right hand, and scratch that itch on his body that has been bothering him.
7. Pet him on his belly and he'll give you a cute little laugh.
8. Swipe your finger from top to bottom, and watch him do his bunny hop.
In addition, you can also:
9. Drop a carrot on him that's too big even for his appetite!
10. Watch him zoom backwards and have him race back up to the screen!
11. Watch him dance!
12. Feed him some carrots (we think this is Ruru's favorite)!